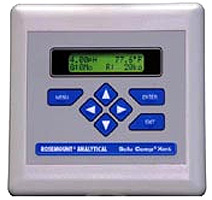 This product has been retired.
For replacement see the Rosemount Analytical 1066

The Xmt transmitter has a rugged, weatherproof, corrosion resistant enclosure (NEMA 4X and IP65). The panel mount version fits standard ½ DIN panel cutouts, and its shallow depth is ideally suited for easy mounting in cabinet-type enclosures. A panel mount gasket is included to maintain the weather rating of the panel. The Xmt can also be surface or pipe mounted.

The Rosemount Analytical Xmt transmitter is simple to set-up and operate. Menu screens for calibrating and registering choices are intuitive and plain language prompts the user through the procedures. The Xmt includes the HART or Foundation Fieldbus digital communication protocols which allows users to set-up, configure, read process variables, and troubleshoot problems via PC or HART communicator

Models of the Rosemount Analytical Xmt family of transmitters: