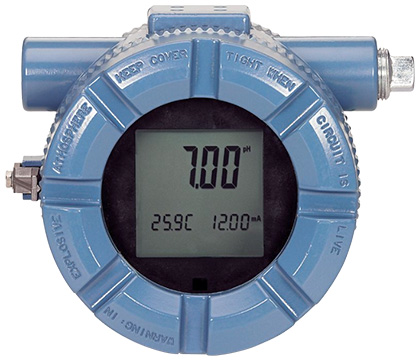 The Rosemount Analytical Model 5081 family of transmitters can be used to measure pH, ORP, conductivity (using either contacting or toroidal sensors), resistivity, oxygen, free chlorine, total chlorine, and ozone in a variety of process liquids. The 5081 is compatible with most Rosemount Analytical sensors. With a rugged, weatherproof, corrosion-resistant enclosure (NEMA 4X and IP65) of epoxy-painted aluminum, the 5081 meets NEMA 7B explosion-proof standards making it possible to locate the transmitter close to the sensor even in the harshest environments.

The Rosemount Analytical 5081 transmitter is simple to set-up and operate. A large, easy to read two-line display shows the process measurement and temperature. The 5081 includes the HART or Foundation Fieldbus digital communication protocols which allows users to set-up, configure, read process variables, and troubleshoot problems via PC or HART communicator. Additionally, an optional handheld infrared remote controller can also be used for programming and calibrating the transmitter. The remote controller works from as far away as six feet.

Models of the Rosemount Analytical Xmt family of transmitters:

Rosemount Analytical 99CC Calibration Certificate
One certificate per lot at standard factory ranges only, includes the model, serial and/or tag numbers (does not include actual test data)
$114.00

Rosemount 1420 Wireless Gateway
NEMA 4X gateway connects WirelessHART networks with host systems with the capacity for up to 100 devices
Starting at
$5,119.87