The COSA Xentaur LPDT dew point transmitter uses a Xentaur HTF™ Aluminum Oxide sensor. The breakthrough HTF™ sensor technology represents advances in thin film and metal oxide sciences and offers significant performance advantages over all other aluminum oxide sensors. The operating principle of the HTF™ aluminum oxide sensors is that a hygroscopic layer of aluminum oxide adsorbs or releases water molecules within its pores, depending on the water vapor pressure in its environment. The electrical capacitance of the aluminum oxide layer changes with the surrounding water vapor pressure. The electrical capacitance is measured between the aluminum core of the sensor and a porous conductive gold layer on the outside.

The advantages of the HTF sensor technology are a result of the proprietary manufacturing method in which the aluminum oxide layer is made to be hyper thin as well as extremely hygroscopic. This results in a very sensitive sensor with fast response.

HTF sensors have a capacitance change, several orders of magnitude larger than that of conventional aluminum oxide sensors due to the hyper thin film, a sharp transition layer, and a special pore geometry. Additionally, this change is quasi-linear, and its sensitivity to temperature is negligible. The advantages of a linear high capacitance response are better sensitivity, better repeatability, and faster response times. Also, the measurement system is less prone to noise and drift, and signal conditioning is kept to a minimum. 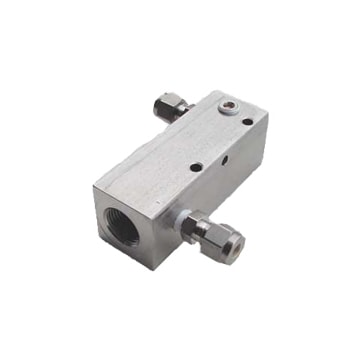 Package of cartridges (10 per package) for the XR06017 coalescing filter.

Other part numbers are available to order but are not currently in stock. Current availability for non-stock parts is "Usually ships in 7-9 weeks". Click here to select options