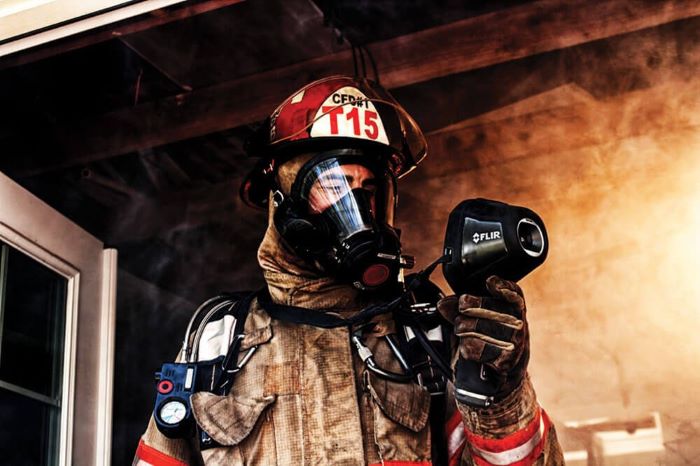 No Stranger to Resistance

Veteran firefighters may remember when they first introduced ear flaps on helmets and protective Nomex hoods. When these were initially standardized in the industry, firefighters pushed back. Why? Because the flaps and hoods would not let you feel the heat, so you would not know when to get out.

With thermal imaging on the rise, the time to make a new standard is now. Significant advancements have been made in terms of personal thermal imaging cameras. But as to be expected, there has been some major push back in early adoption. We can continue the trend, or we can set the new precedent.

Faster Primary Search: Find victims and hot spots quickly while time may not be in your favor.

Self Rescue: Navigate in and out of zero visibility conditions, reducing the number of mayday calls.

Reduce Rekindles: Run overhauls with confidence to ensure the fire has been completely extinguished.

First Responders and Inspection: Observe the scene for heat-related clues such as heat loss or radiant wires or pipes.

TICs: What Can't They Do?

According to the 16 Firefighter Safety Initiatives, number 8 sets the standard for adopting new technology in the firehouse. It reads, “Utilize available technology wherever it can produce higher levels of health and safety.”

Learn From the Vets

In an article written by retired Batt. Cheif Robert Avsec, he explains why thermal imagers need to be standard on every fireman and woman's suit. He spent 26 years in service with the Chesterfield, Va. Fire & EMS. He states that;

“the best tool for reducing firefighter deaths and injuries while combating interior structure fires is the one that keeps them from getting into a jam in the first place.”

We know these tools can keep firefighters more informed, more aware of the safety risks in the building, and can help keep them from getting in a jam in the first place. It appears seemingly obvious that thermal imagers do produce higher levels of safety and health.

Where Is The Disconnect?

"The fire service has a duty to look towards the future and embrace the changes in technology…We no longer rely on one SCBA for a crew, so we should consider not relying on just one TIC, either." says chief Avsec. Lead by example and get your team armed with TICs. As the saying goes, if you do not look at history, you are doomed to repeat it. Well, do you want to be in the same camp of those that thought SCBA's were a waste of time and the ones that thought radios were pointless?

FLIR has pioneered the focus on firefighters. They have fully embraced Safety Initiative #8. FLIR is on a mission to equip every firefighter with a FLIR K2, and make them standard for all firefighters. FLIR has been engineering new products with firefighters in mind. Combining ruggedness and reliability, at a low price point, means higher performing units at lower total costs.

Engineered For The Firefighter

The FLIR K2: Built with the firefighter in mind.

Shop our full catalog of thermal imagers, with engineers available to assist, you can feel confident in your selection whether you are buying for yourself, or your team.

Recent Articles
Introducing the Watlow PM Plus: Temperature Control with a Modern Twist
ProComSol HART Communication: Budget-Friendly Monitoring Solutions
What Is the Industrial Internet of Things (IIoT) and is it Right for You?
Temperature & Fever Screening in Industrial Applications: What You Need to Know
The Next Generation Flow Meter: Panametrics PT900 Replaces PT878
View All Articles