Measures carbon dioxide for use in demanding applications with IP65 housing, 0 to 20% CO2 measuring range 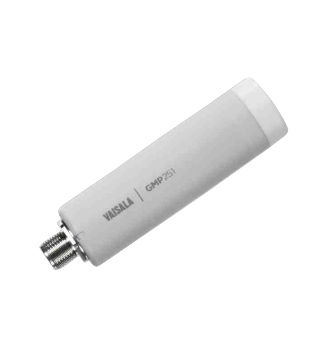 Mike K.
Manager of Outside Sales
8 years at Instrumart

The Vaisala GMP251 Carbon Dioxide Probe is designed for use in demanding applications, like life science incubators, where stable, reliable, and accurate performance is required. The GMP251 is based on Vaisala's unique, second-generation CARBOCAP® technology that enables exceptional stability. A new type of infrared (IR) light source is used instead of the traditional incandescent light bulb, which extends the lifetime of the GMP251.

The GMP251 incorporates an internal temperature sensor for compensation of the CO2 measurement according to ambient temperature. The effects of pressure and background gas can also be compensated for. The measurement range is 0 to 20% CO2 and the sensor performance is optimized at 5% CO2 measurement. The operating temperature range of the probe is wide and the probe housing is classified as IP65. Condensation is prevented as the internal sensor head is heated. The GMP251 is resistant to dust and most chemicals, such as, H2O2 and alcohol-based cleaning agents.

The GMP251 is a compact probe that is easy and fast to install in a number of ways. It's easy to plug in and plug out. The surface of the The intelligent, stand-alone carbon dioxide probe GMP251. probe is smooth, which makes it easy to clean. The probe provides several outputs for the CO2 measurement, analog current and voltage outputs as well as digital RS485 with Modbus protocol.

Vaisala 242659 Connection Cable
M12/5 N female to USB cable used to connect Indigo probes to a PC for use with Insight software
$90.00
In Stock