The Megger 656902 Split-box Pipe and Cable Locator is a hand-held instrument in the classic "split-box" design, consisting of a transmitter and a receiver. The instrument traces underground conductive networks such as water and gas mains, telephone, cable TV, and electric power cables. It determines buried lines depth and locates underground metallic masses such as valve caps and manhole covers.

Designed with patented super-inductive technology, the Split-box Pipe and Cable Locator is lightweight, portable, and easy to use. For easy transport, the instrument and accessories are supplied with a protective tote bag.

To locate and trace an underground metallic line, the line is energized with a radio-frequency signal generated by the transmitter and then detected by the receiver. Inductive or conductive modes of operation are available.

The inductive operational mode does not require direct mechanical line connection. The transmitter can energize a buried line without the need to uncover it. Just place the transmitter on the ground or pavement above the line which, once induced with the transmitted signal, retransmits the signal through the ground and air in a pattern that corresponds to its path. The line carries the signal several hundred yards depending on its depth, the mineralization and conductivity of the soil, and the transmitter power setting.

The conductive mode of operation requires the line to be exposed so that a direct connection can be made. Conductive energizing is preferred over inductive energizing because it results in more highly defined signal coupling. The signal generated does not spread to other conductive lines in the vicinity of the traced line. Using a ground rod with the direct connection increases the energizing efficiency and, therefore, the length of line that can be traced. 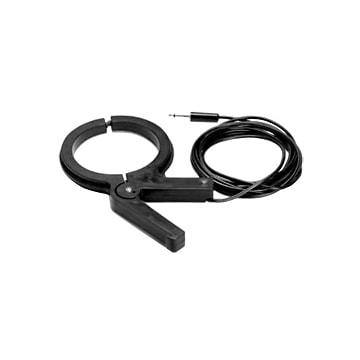