An Introduction to Intrinsic Safety

We often get questions from customers about hazardous area approvals and intrinsic safety. Though these terms are commonly used to classify types of electrical equipment for commercial and industrial environments, there is often some misunderstanding about them such as when intrinsically safe equipment is required, or how to install intrinsically safe equipment. Proper understanding of intrinsic safety is crucial in reducing the risk of fire or explosion in your facility.

Industrial and commercial environments often contain potentially flammable substances which can be ignited by heat or sparks caused by electrical equipment. Whatever your industry, if flammable gases, dusts, or vapors accumulate in sufficient concentration there is a risk of fire or explosion. To mitigate this risk, systems are designed for intrinsic safety which limits the electrical and thermal energy to levels below that capable of igniting flammable substances.

Intrinsic safety provides one of the best solutions to the risk of fire or explosion in hazardous areas. Intrinsic safety is universally accepted under all workplace safety regulations and codified by agencies worldwide.

What is a hazardous area?

The National Fire Protection Association (NFPA) published NFPA 70, also known as the National Electrical Code (NEC), to define hazardous areas and adopt standards for the safe installation of electrical equipment in the United States which are closely aligned with standards developed by the International Electrotechnical Commission (IEC) for intrinsic safety in explosive atmospheres (IEC 60079), and other national and regional standards such as Canadian Standards Association (CSA), Underwriters Laboratories (UL), Factory Mutual (FM), the Instrument Society of Measurement and Control (ISA), and others.

In short, a hazardous area is any location, either indoors or out, with combustible material such as gases, dusts, vapors, or fibers capable of producing an ignitable mixture.

Hazardous areas are classified according to the type of hazard. Class 1 relates to flammable gases and vapors, Class 2 to combustible dust, and Class 3 to easily ignitable fibers and flyings. Within each class are two divisions. A Division 1 designation means ignitable concentrations exist under normal conditions and/or during maintenance work or equipment failure. Division 2 denotes a location where ignitable concentrations only exist under abnormal conditions.

How to achieve intrinsic safety

Intrinsic safety is achieved by using Zener Diodes or galvanic isolation to limit voltage, resistors to limit current, and fuses to interrupt the flow of electricity. Many sensors, transmitters, flow meters, and other types of electrical equipment use these tools to limit the flow of electricity to levels below which can ignite flammable substances to make them intrinsically safe. Other devices such as thermocouples, RTDs, switches, and LEDS are considered “simple apparatuses” and can be used in hazardous areas since they do not store energy, though proper intrinsically safe interfaces must still be used with simple apparatuses.

Any device claiming to be intrinsically safe must have approvals by a recognized standards agency such as NFPA, CSA, FM, ISA, or others depending on the jurisdiction in which it will be used.

Simply installing a device approved for use in hazardous areas does not make the system intrinsically safe. The entire circuit must also be designed for intrinsic safety.

What is an intrinsically safe circuit?

At its most basic level, the components of an intrinsically safe circuit include an intrinsically safe device within the hazardous area, a barrier or isolator in a safe area, wiring components (a fuse, resistor, and often two diodes) that help to safely reduce the voltage and current going to/coming from the device installed in the hazardous area, and proper earth grounding. 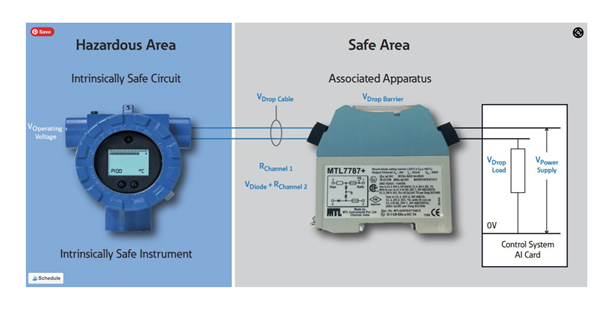 While intrinsically safe devices like sensors or switches control the flow of electricity at the point of contact with flammable substances, barriers and isolators control the flow of electricity from the power source to the device, eliminating power spikes that can ignite flammable substances. Barriers consist of a fuse, resistor, and Zener diodes to limit the energy that is supplied to a circuit and protect hazardous areas from excess energy. Isolators, or galvanic isolators, on the other hand, completely isolate the hazardous area device from the safe area control and have the ability to offload excess power and protect from ground faults.

When installing equipment in hazardous areas, care is required to ensure intrinsic safety standards are met. This protects both workers and your facility. Simply installing an intrinsically safe device is not enough, if the circuit is not designed for intrinsic safety your installation will not be compliant.

Our team of engineers frequently works with customers to find the right products for intrinsically safe applications. If you have any questions, please don’t hesitate to reach out. Properly installing intrinsically safe devices can mean the difference between profitability and disaster.

Do You Have Questions? For further assistance, or any questions, comments, or concerns, visit Instrumart.com or call at 1-800-884-4967 to speak with an applications engineer. We offer free lifetime technical support with every product we sell.